Showing estimated rates per night in US Dollars 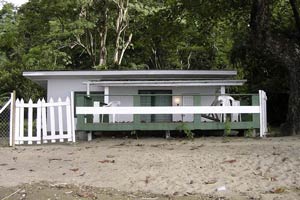 The Man-O-War Bay Cottages are situated directly on the beach in Charlotteville. I fondly remember my childhood holidays, back in the late 1950s, in on of the... two original

1 properties found - you are viewing page 1 of 1

The Man-O-War Bay Cottages are situated directly on the beach in Charlotteville. I fondly remember my childhood holidays, back in the late 1950s, in on of the two original

Provided by the property, or taken from their website

Numbers 1-4, the two-bedroom cottages: These are the original cottages built in the traditional Caribbean style with louvered windows looking out into the bay. Each cottages is located around fifteen feet from the beachfront and is fully furnished including four single beds each, able to sleep four people. Some are furnished with a futon in the living area capable of accommodating an extra person.

Number 5, the three-bedroom cottage: This is our most spacious cottage with one double bed and four singles, capable of housing six people. The newly remodeled kitchen is steps away from the office and commissary. The view of the bay is stunning from the porch, and the beach is located a mere ten feet from the front steps. We recommend this cottage for larger families and travel and tour groups.

Number 6, the one-bedroom cottage: This cottage is referred to by the staff and locals as the "Sugar Shack" due to it's two-person capacity and double bed. The Sugar Shack has a small screened living area that opens up to an open-air porch facing the beach. Nestled beneath the trees about thirty feet from the water front, this cottage is a perfect for honeymooners and other couples requiring rustic simplicity.

Number 7, the one-bedroom flat: This cottage is attached to the back of one of our two bedroom cottages. The flat has a small kitchenette and an open-air porch approximately fifteen feet from the beach. There are four single beds in the flat. Its connecting two-bedroom cottage can be opened up to hold eight adults. A communicating door separates the two, and the flat's bathroom is between the separate cottages to ensure private for sleeping quarters.

Numbers 8-10, the two-bedroom cottages: These cottages are our newest additions, completed in 1998. Each are fully furnished, have new wares and appliances, and are fitted with ceiling fans. All have four single beds each and one futon couch to accommodate an extra person. The three cottages differ only in their location on the cottage grounds and are between ten and fifty feet from the beach.

This property has a weighted Reader Satisfaction Rating of 53.5%   . Click below to read the 11 reader reports that this is rating is based on.

Adam Renwick from U.K. visited in December 2017 and awarded

At the time of their construction these typical Caribbean style Cottages (watch the BBC drama “Death in Paradise” for as better idea) were well appointed, well equipped and surrounded by landscaped gardens. Twenty years of neglect and non-management means that these cottages are now unworthy of their “Budget Accommodation” title and must, in my opinion, be described as not fit for purpose.

We read a number of reviews of the accommodation and so arrived well-prepared to “make do and mend” but what we found left us disappointed, frustrated and saddened. Many of the reviews made mention of “rustic” and “authentic” accommodation but, in my opinion, these cottages are not indicative of the way locals live – they have much higher standards of cleanliness and ensure that their houses are well presented and maintained. What follows is a factual account of what we found and at 500TT per night I expected more.

Prior to booking I asked for photographs of the cottage in which we would be staying. Images were emailed showing a cottage on the beach and mention was made of Cottage Number 2 being available – research showed that Cottage Number 2 was close to the beach and has a veranda which overhangs the sand of the beach. On arrival we were shown to Cottage Number 10 which is not on the beach, has a limited sea view and lead to us having a very different holiday to the one we planned.

Later on during our holiday I found out that Cottage Number 2 had been let to a gentleman for three months which I quite understand takes priority but management should have informed us of the change in arrangements. This would have allowed us to find other beach front accommodation – something that is extremely important to us.

We arrived late at night and were unceremoniously “dumped” at the cottage and were not made aware of how to find management or shown where the switch for the electric heater was – consequently we spent the first 24 hours with no hot water. The following day a passing cleaner kindly contacted management who eventually sent someone to turn things on.

The morning revealed the following:

Front door does not close properly meaning that it is difficult to secure the cottage.

The initial sheets were (fresh) blood stained, fortunately we had a spare bed but replacement sheets were stained, old and threadbare.

All the pillows were revolting and should have been condemned several years ago. The inner covers are yellow, grease stained and smell.

One of the beds is homemade (presumably the original divan was broken), it rocks and is not robust. The mattress was designed for divan bed and so is not suitable for a bed with wooden slats – it is also too small for the makeshift bed frame.

Towels are old and threadbare - one has been left behind by a guest and is from a European conference in 2005.

The Shower room tiles are chipped, broken and stained. The grout is black in places. The drain to the shower is revolting.

The plastic loo seat has been burnt and is deformed and stained.

Various light fittings are burnt and melted. Several light bulbs are missing leading to having to move light bulbs to light different areas.

Windows to the bedrooms are broken/warped so almost impossible to close. When this is achieved there are no catches to secure them.

There are no plugs to any sinks.

Filth on top of the bedroom cupboard shows that it has not been cleaned for several years.

The fridge/freezer constantly leaks water on to the kitchen floor.

The cooker/stove is filthy and does not work correctly. The top has corroded allowing gas to escape and poses a real and constant danger to users. It became clear that 2 of the 4 gas rings did not work correctly and were prone to blow themselves out with a loud pop. In my opinion this appliance should be removed immediately.

On arrival the saucepans required scrubbing clean. The frying pan is beyond redemption and is so bent out of shape that it does not sit on the hob correctly, this is a safety issue.

The kettle (originally black) is now yellow with years of grime.

There is sand/termite dust in the kitchen cupboards which are damp and smell.

The work surfaces are so old that the laminate is de-laminating. They are difficult to keep clean.

The taps to the kitchen sink are loose and leak.

I was particular in establishing the cleaning rota. The cottages advertise as being cleaned at 3 day intervals, management stated 4 but this rota was not kept to. We were forced into complaining, whereupon the cottage was cleaned.

The mosquito netting to the windows is torn allowing several of the 96 different species of Mosquito native to Trinidad and Tobago easy access.

In the living room there is a pile of books and magazines dating back to 2004. They are damp, smell and beginning to rot.

The BBQ is broken and unusable – this is an important factor particularly when the cooker/stove is so dangerous.

Wood to the outside shower floor is rotten and has been over painted to make it look good. At some point this will give way and the user will end up in the drain below.

The front gate is rotten and fell off during our stay.

David Vince from U.K. visited in February 2017 and awarded

To view a detailed interactive map showing the location of this property relative to restaurants, shops and sightseeing features, click this link